# Mission in Word and Deed to Rendille

They quickly experienced the same reactions as the early Christians met. 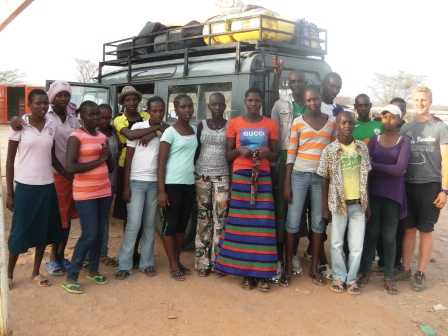 Fifteen young people from our homes at Ngaremara and Wamba spent 5 days this August sharing the Gospel at Ndikir, the Rendille village on the edge of the desert in Northern Kenya where we have a long-term commitment to build a permanent Children’s Home. Their mission coincided with the commencement of our building programme as we laid the foundation for a classroom which will eventually double as a dining/study room in the new home.

The team were full of enthusiasm and encouraged one another in the Lord as they shared and prayed together before each venture into a local traditional village. They quickly experienced many of the same attitudes and actions from the villagers as the early Christians met, when bringing the Acts of the Apostles to life for them. Reactions of the villagers varied from indifference and avoidance, to chasing some of the girls with a stick (while shouting that their god was the local mountain and they didn’t need to hear). Some others, however, asked for prayer for specific situations and encouraging them to come back again.

The mission was a major life experience for the young people who are already laying plans for their next mission to the village. Plans that are being soaked in prayer. Please join them in prayer for the Rendille of Ndikir that they will hear the Good News and come to know the Saviour.