The two week old baby boy was born outside the cultural norms of the Rendille tribe and his life was at risk. The mother is 14 yrs old. 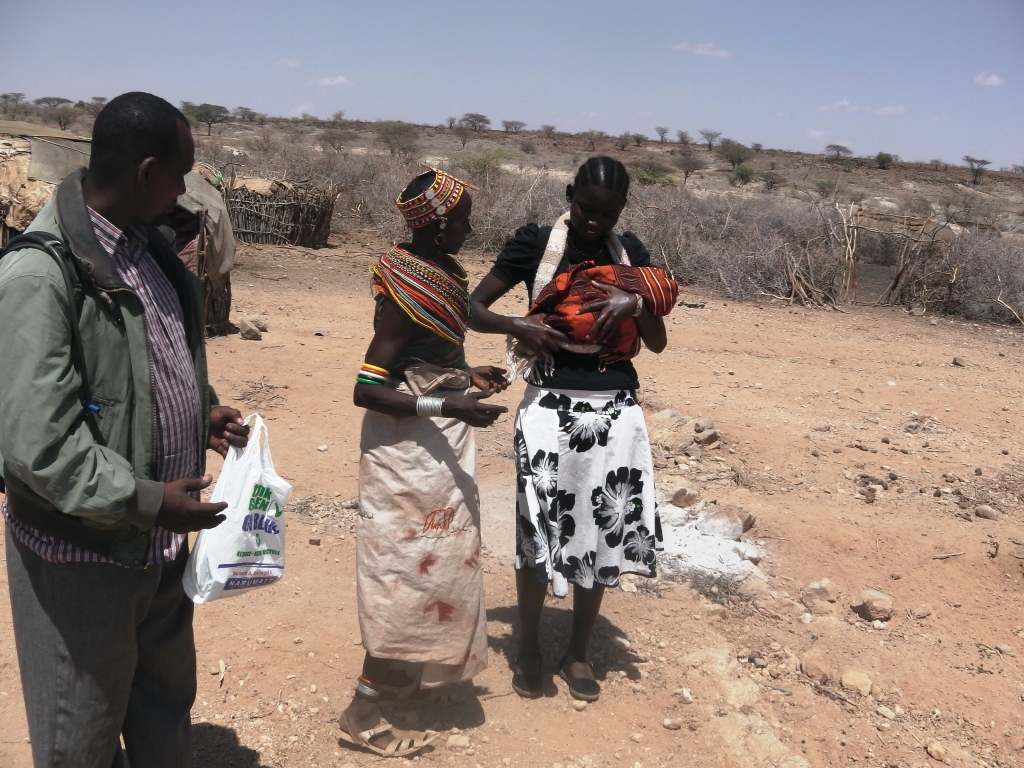 On Sunday 8th March a group from Ngaremara Children’s Home drove to Losidan in Marsabit County to rescue a baby.

The two week old baby boy was born outside the cultural norms of the Rendille tribe and his life was at risk. The mother is 14 yrs old.
In the rescue group with Ken driving were Bernard, student mechanic; Christine, trainee; and Saraine, Freda and Saiyea.
They left Ngaremara at 8am and drove for an hour and a half to Merille on tarmac where they turned off road for an hour to Ndikir where Kindfund have their children’s home and school.
At Ndikir they presented water carriers to the Kindfund family to help with the drought situation they are now experiencing. Here the grandmother of the child and Julius a volunteer teacher joined the group in the car while Raphael went ahead on his motorcycle. On the way to Losidan they stopped briefly with the Senior Chief of the area to advise him of the purpose of the journey.
They continued another 25kms off road to Losidan. It is an extremely hot dry and barren area with temperatures 35 degrees +
Arriving at an outlying bomer (family enclosure) at Losidan, the group waited under the only tree for shelter with some of the local children while Christine went with the grandmother to collect the baby.
The group now with the baby comfortably on Christine’s knee travelled quickly back to Ngaremara after a short stop at the “5 star” hotel in Merille for refreshments. At Ngaremara at 6pm along with the Kindfund children in the home I had the pleasure of welcoming the baby.
After prayer for the safe journey and for the baby he was named Caleb. Caleb received his first bath and was dressed in new clothes by Esther who looked after him for the next two nights.
The final stage of Caleb’s journey to his new home began on Tuesday when Ken and Pamela, Bernard, Christine and I accompanied him in the heat of the afternoon to Wamba. After 40 min on tarmac the next hour was spent on a very rocky and bumpy off tarmac journey to the Kindfund home at Wamba. Caleb on Christine’s knee rested his head on my knee and I cradled it in my hands to protect him from the worst of the jolts. I prayed the whole way for him to sleep and I was extremely grateful for God’s grace witnessing his peace which passes understanding firsthand.
Caleb has been very content eating and sleeping well. He was introduced to the children and staff at Wamba home by Pamela and Mary has been given the task of being mother. There was much excitement among the children at this new arrival. Caleb has joined three other Rendille small children rescued in similar circumstances.
Please pray for Caleb as he settles at Wamba and for the work with the 50 children in the Kindfund home there.
I’m loving my time in Kenya meeting both children and staff- confronting fears, moths, heat and squat toilets and finding Jesus in everything in this new, very different and wonderful place